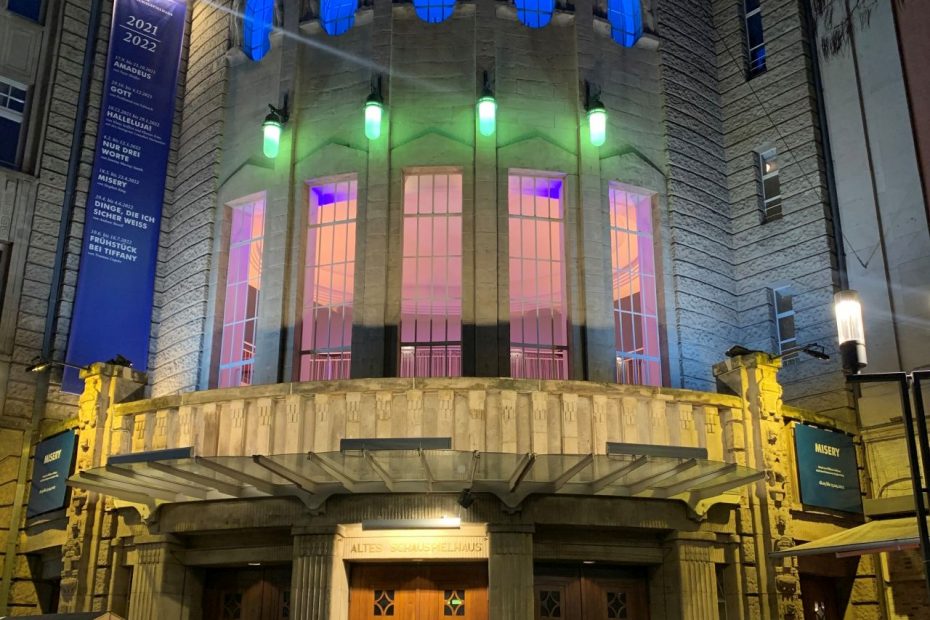 Some prefer music, some prefer books. We know that. But what about theaters?

We, the Englisch LK classes, visited an adaptation of the crime novel “Crooked Letter Crooked Letter” written by Tom Franklin.

The play deals with the loner Larry Ott, who is the main suspect of two murder cases. In focus is his relationship with the black constable Silas Jones.

At least this is so in the novel, not so much in the play, which focuses more on the criminal aspect of the story. The development of the friendship between young Silas and Larry is squished to fit into a few scenes. It is mostly used to explain Silas’ further behavior in the story line. Not only this topic comes short, but also the entire ending of the book, finishing off the play with a cliffhanger.

Regarding the characters themselves, the quality of their depiction varies widely. Silas´ portrayal is more to be loud and harsh, in contrast to the rather calm character described in the novel, who prefers keeping secrets to himself. Carl’s, adult Larry’s and Wallace’s characters were executed quite realistically. The actors conveyed their struggles with social norms convincingly and portrayed the image you get when reading the book.

Despite the mentioned flaws, we still recommend seeing the play, since it is a good representation of the plot and the technical execution such as lights and accents matched the atmosphere of the story. It has definitely helped us obtaining an overview over the whole story.

This website uses cookies to improve your experience while you navigate through the website. Out of these, the cookies that are categorized as necessary are stored on your browser as they are essential for the working of basic functionalities of the website. We also use third-party cookies that help us analyze and understand how you use this website. These cookies will be stored in your browser only with your consent. You also have the option to opt-out of these cookies. But opting out of some of these cookies may affect your browsing experience.
Necessary immer aktiv
Necessary cookies are absolutely essential for the website to function properly. These cookies ensure basic functionalities and security features of the website, anonymously.
Functional
Functional cookies help to perform certain functionalities like sharing the content of the website on social media platforms, collect feedbacks, and other third-party features.
Performance
Performance cookies are used to understand and analyze the key performance indexes of the website which helps in delivering a better user experience for the visitors.
Analytics
Analytical cookies are used to understand how visitors interact with the website. These cookies help provide information on metrics the number of visitors, bounce rate, traffic source, etc.
Advertisement
Advertisement cookies are used to provide visitors with relevant ads and marketing campaigns. These cookies track visitors across websites and collect information to provide customized ads.
Others
Other uncategorized cookies are those that are being analyzed and have not been classified into a category as yet.
SPEICHERN & AKZEPTIEREN