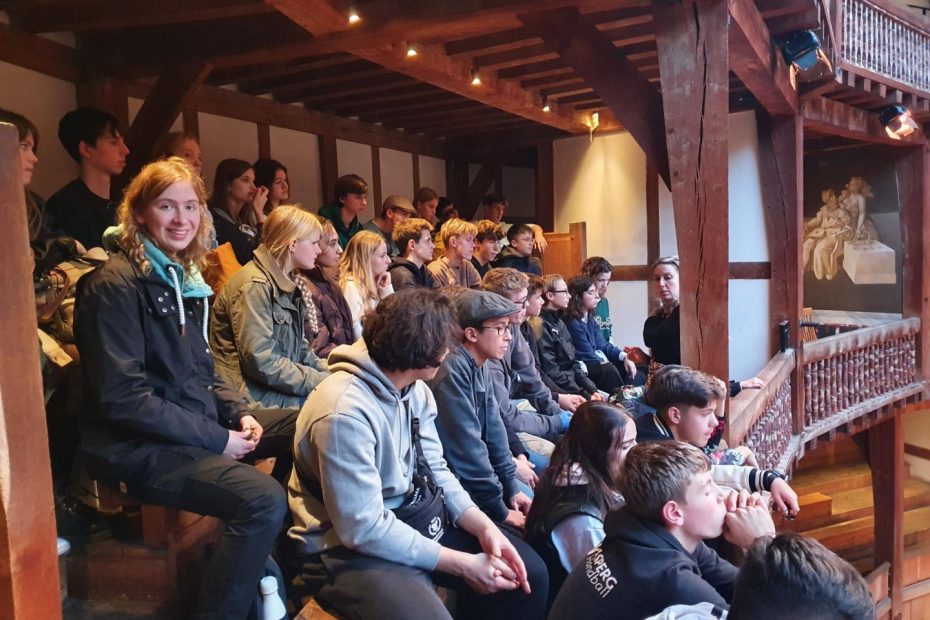 After we had left on Sunday at 4:30 a.m., we reached the Channel Tunnel via Luxembourg, Belgium and France. After the 16-hour drive, we were picked up by our host families.

During the days we spent our time in London. On our first day we took a boat trip on the Thames where we saw the London Eye, the Tower Bridge and Big Ben. Then we walked through London, where we saw some more sights up close.

On Tuesday we went to Camden Market in the morning and had a workshop at the Shakespeare’s Globe Theater in the afternoon.

We spent the third day in Oxford, where we explored the city and were guided by  former OHG student and now student of the Unviersity of Oxford Bastian Wiederhold.

On Thursday we went to the British Museum after that we could go to Covent Garden.

On our last day we said goodbye to our host families in the morning and took our suitcase to the bus. In the evening we were supposed to go home again. In the morning we went to the Tower Bridge and went into one of the towers. After that we were at Borough Market. In the evening we met at the O2 Arena, where we took the bus home overnight. Around nine o’clock the next morning we arrived at the circular sports hall.

We also had free time on the individual days, when we were allowed to explore London on our own in small groups. In the evenings we always went back to the host families, where we got a warm dinner. We and the other students really enjoyed our trip to London.

This website uses cookies to improve your experience while you navigate through the website. Out of these, the cookies that are categorized as necessary are stored on your browser as they are essential for the working of basic functionalities of the website. We also use third-party cookies that help us analyze and understand how you use this website. These cookies will be stored in your browser only with your consent. You also have the option to opt-out of these cookies. But opting out of some of these cookies may affect your browsing experience.
Necessary immer aktiv
Necessary cookies are absolutely essential for the website to function properly. These cookies ensure basic functionalities and security features of the website, anonymously.
Functional
Functional cookies help to perform certain functionalities like sharing the content of the website on social media platforms, collect feedbacks, and other third-party features.
Performance
Performance cookies are used to understand and analyze the key performance indexes of the website which helps in delivering a better user experience for the visitors.
Analytics
Analytical cookies are used to understand how visitors interact with the website. These cookies help provide information on metrics the number of visitors, bounce rate, traffic source, etc.
Advertisement
Advertisement cookies are used to provide visitors with relevant ads and marketing campaigns. These cookies track visitors across websites and collect information to provide customized ads.
Others
Other uncategorized cookies are those that are being analyzed and have not been classified into a category as yet.
SPEICHERN & AKZEPTIEREN